With Cory McAbee in person! 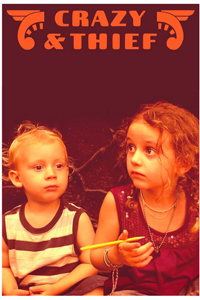 See Cory McAbee perform selections from Captain Ahab's Motorcycle Club in person at Shine (2027 13th St., Boulder, CO) on Wednesday October 3 at 9:00 PM. Show your IFS ticket stub for half off admission to the performance.

A light and lilting narrative at the 2012 Los Angeles Film Festival that just steals my heart is Crazy & Thief, an instant charmer that will make you heart smile and have you grinning from ear to ear. Director Cory McAbee calls on his own 7 year old daughter, Willa, and 2 year old son, John, to fill us all with the wonder, magic and imagination of childhood as Crazy and Thief embark on the adventure of a lifetime. Armed with a "star chart" created by Crazy, the two set a course for their ultimate goal, find the Star of Bethlehem; a goal which is determined through their adventures during the day.

With the majority of the film lensed from the eye level and POV of Crazy and/or Thief (i.e., kidlet height), we are swept into their magical world with such wide-eyed wonder that itfs as if you, yourself, are along on the journey. Lighting is soft and natural keeping the tone of the film equally light, at times even giving the illusion of starlight dancing on their heads. Beautiful cinematic effect.

Adorable as adorable can be, as Crazy and Thief, Willa and Johnny McAbee, are beyond cuteness, particularly Johnny, whose exuberance just overflows from the screen and into your heart. It’s this natural innocence that also makes for some of the best comedic moments a la Charlie Chaplin.

But it is the dreamy, childlike state in which you will find yourself drifting while watching this film that seals the deal and which makes this a must-see!