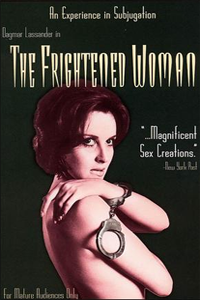 While watching a bunch of Italian Giallo-themed trailers there was one that stuck out as particularly promising. It had interesting compositions and impressive set designs, including a deliriously macabre and surrealistic scene of a skeleton collapsing between the teeth of a large and theatrically constructed vagina dentata that leaves the skull bouncing out between the thighs. That, I thought to myself, is a film I must see.

Femina Ridens (aka: Giodo d’amore, gioco di morte, The Laughing Woman, The Frightened Woman) was directed by Piero Schivazappa and released in 1969. It’s a perfect companion piece to Yasuzo Masumura’s Blind Beast (released the same year). Fellow Morlock Jeff knows about it because it’s included in the Trailer Park Fantasy lineup he posted a while back. Femina Ridens also has over 30 distinct reviews on IMDB, so clearly it’s not too obscure by modern standards and you can even rent it on Netflix.

What I don’t understand, however, now that I’ve finally seen the film, is why it wasn’t on my radar at a much earlier date. Granted, Schivazappa, with only four other theatrical features to his name (none of which ring a bell), wasn’t going to score any name recognition when compared to the usual suspects (Bava, Argento, Fulci, Deodato, Soavi, etc.) – but! – one of the co-writers for Femina Riden‘s script was Guiseppe Zaccariello (Twitch of the Death Nerve), the score was composed by Stelvio Cipriani (Rabid Dogs), the film stars Philippe Leroy (over 80 years old and still active – I last saw him in Mother of Tears) and Dagmar Lassander (from Bava to Fulci, she’s done her Giallo share). Add ambitious anamorphic cinematography, one of the most unusual stories you’ll ever see which, in this case, happens to involve a rich sadist and the woman he kidnaps, several unexpected plot twists, and memorable art-design in every frame. The end result is something that I’m very surprised wasn’t part of my film lexicon growing up as a young film nerd.

In the early nineties I diligently combed through The Psychotronic Encyclopedia of Film, read Spaghetti Nightmares, combed through various editions of Phil Hardy’s Overlook Film Encyclopedia, consulted James O’Neill’s Terror on Tape, and went through countless other similarly themed compendiums. On my bookshelf you’ll find female academics writing about horror like Men Women and Chainsaws: Gender in the Modern Horror Film, by Carol J. Clover, and Cutting Edge by Joan Hawkins, and these books are resting next to your usual more testosterone-fueled fan books, like The Gorehound’s Guide to Splatter Fims of the 1960s and 1970s, by Scott Aaron Stine, and Fangoria’s 101 Best Horror Movies You’ve Never Seen, by Anthony Timpone.

Despite having these resources at my fingertips, alongside many others, the first I ever heard of Femina Ridens was thanks to Jeff’s Trailer Park Fantasy post, but this mental note lay dormant for several years until another good friend showed me the trailer anew, followed shortly thereafter by a screening of great-looking 86-minute long version of the film (this most recent incarnation was released in the UK courtesy of the Shameless Screen Entertainment DVD edition which looks great, but IMDB lists a running time of 108 minutes which leads me to suspect a definitive version still eludes me). Having finally seen the film I can say is that if ever I were to put out a list of the Best Horror Movies You’ve Never Seen, Femina Ridens would definitely be on there.

Here are three reasons why I feel Schivazappa’s Femina Ridens fell through the cracks: It’s not, strictly speaking, a horror film from beginning to end. It starts out as a creepy sexploitation thriller but the third act probably had all the gore hounds rolling their eyes in disbelief and filing it away as dismissible Freudian psychobabble. Personally, I found the radical shift in tone exhilarating. Secondly, the x-rating surely had an adverse impact. While there are certainly many films that were released around this time that obtained some amount of helpful notoriety with their “x” (Last Tango in Paris, A Clockwork Orange, etc.), Schivazappa did not have the cachet of Bertolucci or Kubrick. The third reason is not necessarily the last, as surely there are many reasons, but the subject matter itself which places sadistic torture at the front and center (literally so, as the film has a thing for symmetry) probably played a prominent role in keeping Femina Ridens from reaching a wider audience. The various titles probably didn’t help either, but in retrospect I have to say that I do feel like in watching the film I walked into The Frightened Woman but walked out of The Laughing Woman. The Italian title is more comprehensive, as Ridens is a genus of skippers (aka: a type of butterfly) which hints at the metamorphism within the story.

I hasten to add that anyone who sticks it out to the end will find the film relatively chaste by comparison to, say, American Psycho or Shame. Over 40 years ago, though, I can easily imagine a lot of people leaving before the half-way mark and never realizing what they really missed; an audacious pic that flips the opening misogynistic tropes on its ear.

As I search for what others had to say about the last half-hour of this film, which is where the butterfly really comes out of the cocoon, there is no way I can improve upon Ben’s excellent Breakfast in the Ruins blog. It answers that same question in a very entertaining way:

I found myself agreeing with Ben’s essay on all points, except where he says that “It would probably be a bit of a stretch to hail The Frightened Woman as a ‘lost masterpiece’ or somesuch.” Granted, the word “masterpiece” should be saved for rare moments. I’m also new to Schivazappa and can’t speak for his other films, although there seems to be a consensus among other reviewers that these other films were forgettable by comparison.

It’s thus probably safe to say that, while maybe not a masterpiece in the broader sense of belonging to the pantheon of such films as Kubrick’s 2001: A Space Odyssey (also released in ’69 – what a great year!),  Femina Ridens is at very least Schivazappa’s personal masterpiece. Lest that seem like I’m damning the pic with faint praise, let me add that, before the internet came along to save it from complete obscurity, the film was most assuredly and unfairly lost to the same cult film enthusiasts who would appreciate it the most. If you’ve seen all of Alejandro Jodorowsky’s films, liked Antonioni’s Blow-Up, and grew up watching episodes of The Prisoner, then Femina Ridens should have been part of the visual diet.

Either way: what was lost is now found, and one way in which people are making up for lost time can be found in the wealth of screen-grabs now eagerly being shared by those of us belatedly discovering this lost gem. Yes, perhaps that’s the best word for Femina Ridens. Not so much a masterpiece as a diamond in the rough, a Venus in furs.