Kubrick's Odyssey: Secrets Hidden in the Films of Stanley Kubrick

With Jay Weidener in person 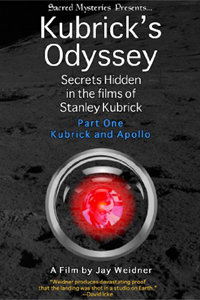 Jay Weidner is a man with a lot of imagination. I like that, make no mistake. I love finding subtexts, I'm a strong believer in the entertainment value of certain conspiracy theories and pseudo-sciences. There's a reason why I'm always watching Ancient Aliens, UFO Hunters, Brad Meltzer's Decoded etc: because I love imagination and deconstruction of what most people take for granted. That doesn't mean I believe in it. I'm a born sceptic, an atheist since childhood and I see documentaries like Kubrick’s Odyssey as entertainment, like an almost-real life Indiana Jones adventures but with film nerds.

I'm not the one saying "No thank you, Sir" to speculative conspiracy docs, but I like to see some evidence. Some ambitions. What we have here is a few analysed photos in the beginning and then it's just Mr Weidner who speculates about what he sees in The Shining. And he sees a lot.

He connects everything to the moon landing, from numbers to pieces of art. Jack and Danny is just two sides of Kubrick: the workaholic slave under the secret government moon landing project and the suffering artist. The room 237 represents the 237 000 miles there is to the moon, the Apollo 11 shirt that Danny is wearing is just not a coincidence and on and on.

I wonder what he will find in Barry Lyndon? Maybe a secret Masonic message about world domination? Who knows, but one thing is for sure: I'll be there and watch.

Kubrick's Odyssey: Secrets Hidden in the Films of Stanley Kubrick