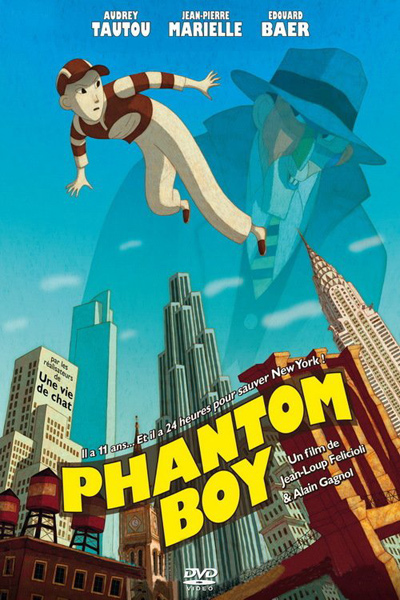 Hand drawn animation still beats computer-generated animation. A bold statement, I know. But even if I don't entirely believe it, it seemed to necessary to endorse hand-drawn work after watching Phantom Boy, the latest animated feature from the team of Jean-Loup Felicioli and Alain Gagnol (A Cat in Paris).

This one tells the story of cancer-stricken, 11-year-old Leo, a boy who establishes a friendship with a wounded detective who's being treated in the same hospital. A fantasy element arises: Because Leo can have out-of-body experiences, he floats out of the hospital and serves as the eyes of the detective whose recovery keeps him in a wheel chair. None too popular with his superiors, the detective wants to capture Broken Face, a villain with a plan to extort big money from the city of New York, where the movie is set.

The cop, who never leaves the hospital, also receives help from an eager journalist with no qualms about putting herself in danger. The characters are nicely drawn, a film noir-influenced mystery keeps the story moving and the world created by Felicioli and Gagnol seldom fails to captivate.