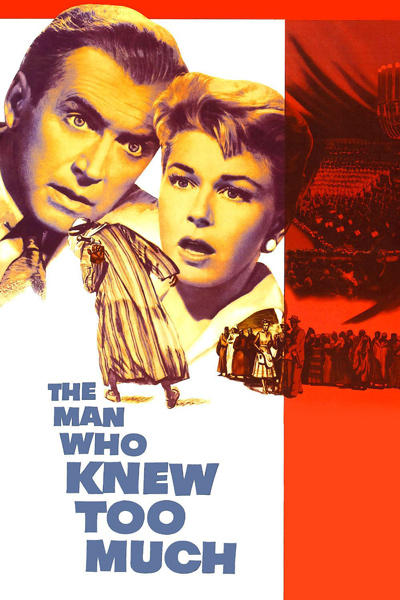 ALFRED HITCHCOCK has shamelessly reverted to an old story and to the cinematic style that made him famous in the Thirties with his new film, "The Man Who Knew Too Much." Yet those who recall his early pictures made in England—including the one that had the same theme and tag as this one—will not be distressed by this news.

For Mr. Hitchcock contrived some lively thrillers with his formula of mystery and suspense, and he made international intrigue popular when it was getting an evil name. He virtually educated critics in the techniques and refinements of the "chase."

So it shouldn't distress his ardent public to learn that he has cleverly combined his old style and modern screen processes of VistaVision and color in his new picture, which is at the Paramount.

The story is lean and fluid. An American family—father, mother and young son—are sightseeing in Marrakesh, Morocco (this is where the scenic stuff comes in), when suddenly a Frenchman is murdered in cold blood before their eyes. Dying, the Frenchman whispers a cryptic message to the man, who happens to be a doctor. This makes him the man who knows too much.

That's the beginning of the mystery. The "chase" follows close on its heels when the son is kidnapped by a British couple who pretend to be traveling friends. And the suspense is henceforth accumulated as the father and mother fly to London to seek their son, who they realize is being held hostage to keep the father from revealing what he knows.

James Stewart tops his job in "Rear Window" as the man who knows too much, and Doris Day is surprisingly effective as the mother who is frantic about her child. She also has a dandy sequence in which she signals to the boy with a song. Bernard Miles and Brenda de Banzie are properly creepy as the British couple who snatch the boy, Christopher Olsen is good as the latter and Reggie Nalder merits a shriek as the man with the gun.

Even in mammoth VistaVision, the old Hitchcock thriller-stuff has punch.