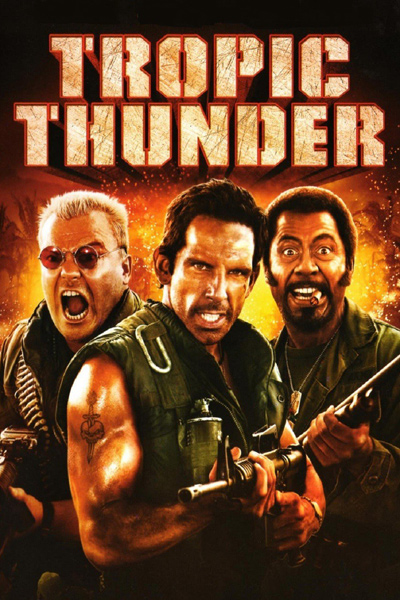 The documentary “Hearts of Darkness” is about the struggles of filming the great Vietnam war movie “Apocalypse Now.” Ben Stiller’s “Tropic Thunder” plays like that doc’s nightmare. A troupe of actors, under the impression they’re making a Vietnam war movie, wanders dangerously in the jungle and is captured by a gang of drug lords who think the actors are narcs. The movie is a send-up of Hollywood, actors, acting, agents, directors, writers, rappers, trailers and egos, much enhanced by several cameo roles, the best of which I will not even mention. You’ll know the one, although you may have to wait for the credits to figure it out. Intercut with the jungle scenes are Hollywood scenes featuring an agent and a studio executive. The movie, written by Justin Theroux, Stiller and Etan Cohen, is familiar with the ordeals of filmmaking and location work, and distills it into wildly exaggerated scenes that have a whiff of accuracy. Especially interesting is the way the director, Damien Cockburn, leaves the picture, which perhaps reflects the way some actors feel about some directors. — Roger Ebert