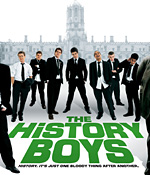 Set in 1983, the story concerns eight students at a Yorkshire school being pressured to get into elite universities. The film can't hide its stage origins, but Bennett's dialogue sparkles and skewers with killer wit. Dig in! (P Travers, Rolling Stone)