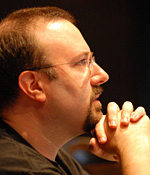 Cianfrance (CU, Boulder '92-'94) was recently awarded $1 million to work on his independent film, BLUE VALENTINE. In 1995 his first feature film, BROTHER TIED, screened at the Sundance Film Festival. He later won an award for Best Cinematography at Sundance Film Festival for QUATTRO NOZA. Tonight he'll show clips and talk about his work as director, editor, and cinematographer on various films.