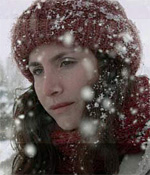 Nuri Bilge Ceylan's Climates is the story of the unraveling of the marriage between a middle-age college lecturer (Ceylan himself) and his younger TV-producer wife (played by Ceylan's real-life wife, Ebru Ceylan). The film opens in the sun, with the two enjoying, or at least trying to enjoy, a beachfront vacation, and ends in the snowy rural clime to which the husband has followed his wife in hope of reconciliation. As with "Distant," the dialogue is minimal, the takes are long, the narrative is laconic and the cinematography is painterly. (V.A. Musetto, New York Post)