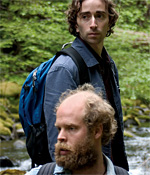 An observational film that’s presented with such heartfelt realism that its long silences and contemplative camerawork could be mistaken for a lack of sophistication. Written by local author Jonathan Raymond (based on his short story) and produced by Todd Haynes, the film follows thirtysomething Portland friends Mark (Daniel London) and Kurt (musician Will Oldham), as they take a short road trip from the city to Bagby Hot Springs. (D. Taylor, Portland Tribune)