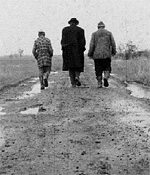 This very special event was made possible with help from Toby Leonard (Belcourt Theater, Nashville, TN), Dylan Skolnick (Cinema Arts Centre, Huntington, NY), and Katalin Vajda (Magyar Filmunió, Budapest).
Hungarian auteur Béla Tarr's seven-and-a-half-hour-long masterpiece will be presented today as it was meant to be seen: in it's entirety and in one day. The first part (300 minutes) will begin at noon and will have one 15-minute break. After this there will be a dinner intermission with the second part (135 minutes) beginning at 7pm with no breaks.

This cinematic landmark is hailed as the definitive statement on the end of Communism in Eastern Europe and unfolds in 12 chapters inspired by the tango (six steps forward, six steps back). An excerpt from the Cleveland Cinematheque describes it as "a monumental black comedy with metaphysical overtones; a menacing mystery with an elaborate, interlocking jigsaw structure; and a technical tour-de-force with virtuoso long takes, gorgeous b&w cinematograpy, indelible sound effects, and an unshakeable mood of doom and gloom." This is a major and must-see event for anyone who is interested in the possibilities of cinema as great art.

$7 ($5 for students, or 2 punches for punchcard holders