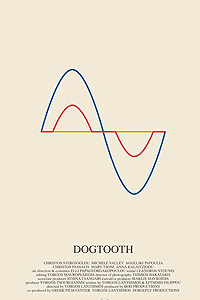 "While I was up at the Toronto International Film Festival -- I'm actually writing this on my flight back from the Great Off-White North -- I had a chance to see a number of amazing movies. (And, yes, some not-so amazing movies, although that's a story for another ... moreday.) But the one that made the biggest impression was a film I'd already seen in May at Cannes, Yorgos Lanthimos' "Dogtooth" -- the scariest, funniest, most fascinating and creepiest movie I've seen all year or, for that matter, in a long time. I know, I know -- with over 300 films playing Toronto, how could I justify going to see a film for the second time? Well, the answer is: Because "Dogtooth" is amazing.

In a big house in the hills outside a big city, mom and dad raise their three children -- with rules, and rituals, and legends and lore. The children have never been off the property; they've never seen a movie; they're told that "phone" is what you call a salt shaker and a "motorway" is a strong wind, because they don't need to know about communicating with the world or driving and so their days are occupied with games and exercises and absolute obedience.

And I don't want to tell you much more, but, I absolutely could -- about the David Hockney-like compositions as Lanthimos shoots the quiet summer lawn and calm pool of the family's compound so that their normalcy takes on both beauty and menace. Or about the amazing performance by Aggliki Papooulia as the eldest daughter, who begins to prod and poke and then kick at the walls of the prison her parents have made for her. Or how "Dogtooth" speaks to Greek history, to be sure, but it also works as a universal fable about the blunt mechanics -- and bizarre appeal -- of dictatorship. Or how "Dogtooth" is funny and then terrifying and, somehow, both at the same time. Haunting, bold and truly cinematic in its ambitions, expressions and convictions, "Dogtooth" might be the best film I've seen all year -- and, somehow, it got even deeper and more disturbing on the second viewing. And the good news is that it was picked up for distribution by Kino at Toronto, so it'll be coming soon to a theater (or VOD service) near you; of all the moves I've seen this year, "Dogtooth" bit down so hard it's made the strongest, strangest impression."