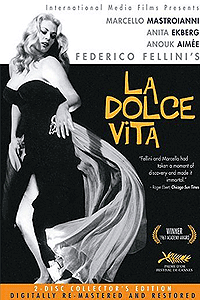 Fellini split from neorealism when he followed a gossip columnist around Rome for seven days. Those seven days are an existential journey amidst love, sex, parties, celebrities and decadence.


NOTE: The rare 35mm print of La Dolce Vitae we were sent is dubbed. For the sake of purity, tonight's film will be presented digitally in the original Italian soundtrack with English subtitles.