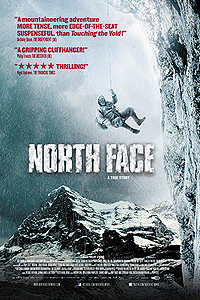 It is the summer of 1936 and Nazi Germany is preparing to host the Olympic games. Two men set out to climb the treacherous north face of the Eiger, a 13,000-foot mountain in the Bernese Alps. This film, based on the true story, documents their ascent up the mountain and the epic battle between man and unrelenting nature. This film is a re-examination of the mountaineering genre, which has been forever tainted by the propagandist Nazis. Phillip Stolzi’s film captures the staggering landscapes with an austere reverence, showing the overwhelming beauty and simultaneous destruction inherent in nature.