Uncle Boonmee Who Can Recall His Past Lives 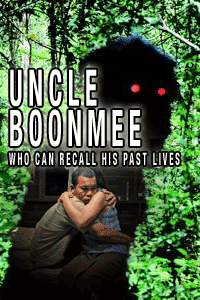 The elemental and spiritually consoling films of Thai director Apichatpong Weerasethakul demolish the boundaries between life and death, man and beast and pain and happiness. They're experimental films, not made to be fully understood or to deliver soft sentiments in a language we instantly comprehend. Two of his previous features -- 'Tropical Malady' (2004) and 'Syndromes and a Century' (2006) -- adopted a Yin and Yang structure, with two distinct chapters that offered similar stories told in contrasting, albeit complementary registers. This new film is more of an anthology of spry, interlocking episodes which all ruminate on the theme of reincarnation and trace the meandering journey of one man's spirit through various times and bodies.

To Western audiences, the feelings and ideas Apichatpong chooses to ponder can seem abstruse and maybe a little eccentric. But to sample one of his films is to dive in to the cosmic pool of his imagination and join him in reliving his own idiosyncratic and highly personal memories through playfully inquisitive eyes. He deservedly won the Palme d'Or at the Cannes Film Festival for this, his sixth feature, and it makes for a perfect jumping-off point for the uninitiated.

The scene in which Boonmee descends into a sparkling cave and finally expires is the film's most moving, not because of the stoicism with which he accepts his fate, but the simple way that Apichatpong depicts death as a fluid draining from the body and sinking back into the earth.

Despite the fact that the film is loosely derived from the tenets of Zen Buddhism, Apichatpong is not out to make religious statements. And even though the film casually alludes to atrocities committed in the 1980s by the Thai government against suspected Maoist sympathisers (Boonmee admits to having shot some himself), it's also not a political film. These aspects are only included as elements that shape our memories and our consciousness.

Apichatpong doesn't use his camera to stress what we should be looking at, thinking or hearing. He uses long takes and subtle edits to generate moods, atmospheres and feelings. It's perhaps not as complete and rigorously focused as his previous works, but as a film which sees death as just a single, tiny link in an infinite chain of life, it's incredibly uplifting.

Uncle Boonmee Who Can Recall His Past Lives