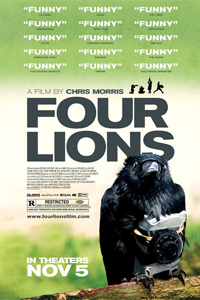 Is there any subject so serious, so taboo, that it cannot be made into a joke? Before my time, some people thought nuclear war was too abhorrent. Then Dr. Strangelove came along and shattered that thought. My mother once told me she thought child abuse could never be funny, but then admitted to laughing at the tasteless name of a Trivia Bowl team with the name of a prominent child murderer at the time next to the words “Day Care Center”. A recent equivalent might be “Michael Vick’s Doggie Day-Care.”

See? Any subject can be the subject of humor. Take radicalized Islamic suicide bombers... please!

The four lions of the title are would-be suicide bombers intent on finding a suitably inflammatory target in Britain. (They would also make a great comedy troupe a la Broken Lizard or the Reno 911 players.) Riz Ahmed plays Omar, the smart one, whose job is to plan the attack and whose comedic job is to look exasperated at his sidekicks. Nigel Lindsay plays the angry one, Kayvan Novak plays the big lug, and Adeel Akhtar plays the gentle soul. Arsher Ali, playing the fifth lion, a handsome ladykiller, joins later.

The very idea of making a comedy about inept suicide bombers is fraught with peril. Make the attackers too toothless and you miss the point of trying to make risky comedy, too vicious and it’s not funny, too cartoony and it’s insensitive to Muslims.

Director Christopher Morris and his three cowriters strike a good balance. When we first meet the lions, they are shooting a video threat to be posted on the internet. For a few brief moments Four Lions looks like a deadly serious drama about the lives of terrorists. Then Waj (the big lug) picks up a toy replica of an AK-47 and flourishes it at the camera. Soon the lions are bickering about how stupid the toy gun looks, how to make it look tougher using forced perspective, or whether there’s anything on the tape other than bloopers.

Two of them travel to Afghanistan for special training and are sent back home in disgrace. They manage to make some fragile explosives, though having bought their ingredients from the same supplier may have compromised their identities. And they can’t agree on a target; their ideas range from the ridiculous to the sub-optimal.

All of this is played with a completely straight face; there’s no winking at the camera (praise Allah), even when the terrorists dress up in Ostrich-Cowboy costumes to infiltrate their target.

The humor is risky enough and black enough — I’ll say there are several deaths, without saying who or how — that Four Lions will not appeal to all tastes. But if you like black jellybeans, black coffee, and black humor, Four Lions is probably worth your time. Its small budget and homemade feel keep it from being a masterpiece. But it illustrates a maxim I learned from my mother: that there is no subject so taboo that it can’t be made into a joke.