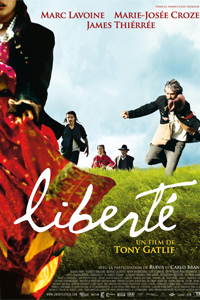 A magnificent paean to the mad ecstasy of freedom with a wholly original take on imprisonment, "Freedom," Tony Gatlif's film about gypsy victims of the Holocaust, shuttles between the trite and the sublime. Gatlif's vision of the Nazi occupation of France, as played out among the gadji, hits every movie cliche in the book, but his depiction of the "gypsy soul" has never been more visceral. "Freedom" reps the helmer's most gut-wrenching feature and his most accessible opus since "Latcho Drom" and "Gadjo Dilo," spelling possible arthouse returns overseas.

Set in 1943, "Freedom" follows the fortunes of a small band of Roma who are greeted with more hostility and suspicion than usual as they return to a much-altered French village under Vichy control; the cabaret owner for whom they performed has now turned collaborator. They are befriended by Theodore (Marc Lavoine), the town's veterinarian/mayor, and by schoolteacher Mlle. Lundi (Marie-Josee Croze), a secret member of the Resistance. P'tit Claude, an adorable 9-year-old orphan taken in by the band, then more or less adopted by Theodore, forges a link between the town and the encampment.

As always in a Gatlif film, music determines meaning. In one of the pic's most nuanced and moving scenes, an impromptu post-harvest dance briefly brings townfolk and Roma together in fragile harmony.

Narrative has rarely been Gatlif's strongpoint, and the occupation drama he constructs around the two romance-bound do-gooders deploys tropes so old, they almost predate the war (tied to chairs in rooms across the hall from one another, Theodore and Mlle. Lundi exchange yearning glances whenever their tormenters open and close the doors). Similarly, a lengthy tracking shot across a long line of gypsies in a temporary internment camp, complete with weeping violins on the soundtrack, overdoes the pathos.

But in the character of gypsy Taloche (James Thierree), Gatlif finds a unique approach to a subject that has haunted his films since his first deportation-themed short, "Canta Gitano." As embodied by acrobat/actor (and grandson of Charlie Chaplin) Thierree, Taloche is a whirling dervish of inchoate emotion, his unfettered soul finding extravagant expression as he flings his body into impossible configurations, splashes through streams or crawls between train tracks. Taloche incarnates the spirit of nature and of freedom ("Korkoro," the pic's Roma title), and as experienced, uncomprehendingly, through him, the cruel imprisonment suffered by the gypsies becomes intolerable.

Gatlif makes no secret of the major role played by the French gendarmerie in rounding up the Roma. If Germans with machine guns and dogs stalk the perimeters of the frame, the French occupy its center. It is clear that however unspeakable the fate of the hundreds of thousands of gypsies killed in concentration camps, persecution neither began nor ended with the Third Reich.

The lush impressionistic palette employed by vet lenser Julien Hirsch ("Lady Chatterley") enhances the pastoral peace of the French countryside, putting the war and its atrocities in sharp relief.