The Agony and the Ecstasy of Phil Spector 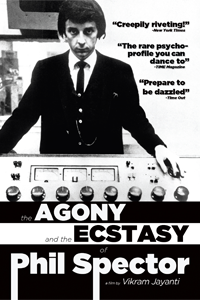 Never has a film been more accurately titled than "The Agony and the Ecstasy of Phil Spector."

A documentary examination of the genius, madness, arrogance and abject insecurity of rock music's most famous record producer, the film simultaneously revels in the man's obviously distorted views, the brilliance of his groundbreaking musical work in the '60s and '70s, and the tragedy of his murder trials in recent years.

Director Vikram Jayanti has built the film around a series of BBC interviews he did with the famously reclusive Spector while the producer was going through his first murder trial in 2007.

But the interviews are only part of what's going on. As Jayanti leads Spector through his discography -- "Be My Baby" to "You've Lost That Lovin' Feeling" to "Let It Be" and "Imagine" -- he's also cutting away to trial footage.

Meanwhile, printed critical analysis pops up on the screen, detailing the aesthetic achievements of Spector's songs, and archived footage of musicians performing those songs keeps rolling out.

Within a matter of minutes, there's courtroom footage of a witness, Ronnie and the Ronettes singing "Be My Baby," and Spector sitting in his lush mansion comparing himself to Galileo. It's a crazy quilt approach that Jayanti weaves together skillfully.

Spector was accused of shooting and killing B-movie actress Lana Clarkson after picking her up at a nightclub where she worked as a hostess. Spector's defense -- and the film persuasively agrees with this -- argued that Clarkson killed herself and the eccentric producer was essentially on trial for being Phil Spector.

There's no question that Spector is a fully bizarre character (during much of the trial, he sported an electro-shock hairdo he says was a tribute to Albert Einstein and former Detroit Piston Ben Wallace).

There's also no question that no one thinks more highly of Phil Spector than Phil Spector, as he repeatedly compares himself to the great geniuses of history for his creation of the Wall of Sound production technique.

What's amazing is that as the film progresses, the genius label seems more and more earned. It helps if you're familiar with his music, but even if you're not, the scope of his accomplishments is pretty evident.

Spector's an egomaniac dandy, his eyes never seem to be in sync with one another and he seems to have an inexplicable hatred of Tony Bennett (really, who hates Tony Bennett?) -- in other words, he's easy to dislike. Still, he made some great music.

But in the film, he's on trial for murder, and even though the interviews concentrate on show biz stories, and the print intellectualizes his work while the performances revel in the innocence of the '60s, the camera keeps returning to the trial, to his gonzo appearance, the forensic inconsistencies and Clarkson herself.

Eventually the different mediums converge on a blended confluence of understanding about one of the world's quirkiest characters.

As it turns out, they are also headed for either tragedy or justice. The judge declared a mistrial the first time around, but Spector was hauled back into court eventually and found guilty. Today, at age 70, he is serving a 19-year sentence for second-degree murder.

From rock and roll genius and madman of the mansion to a prison cell. Agony and ecstasy indeed.

The Agony and the Ecstasy of Phil Spector