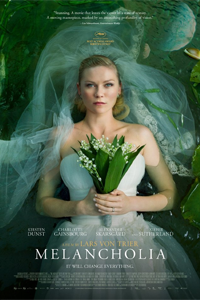 "Melancholia" is a hauntingly beautiful meditation on depression that is as likely to exasperate as many people as it moves.

So it goes. Lars von Trier's latest film, and his most accessible in ages, is definitely not for everyone, in a way reminiscent of Terrence Malick's "The Tree of Life," for which it could serve as a sort of companion piece. Yet although "Tree" takes in the whole of life, from the literal beginning to the end, "Melancholia" is about the end of the world.

Not as in death. As in the honest-to-goodness, planets-colliding end of the world. Perhaps it's the manifestation of a metaphor for depression. Perhaps it's meant as the actual snuffing out of life on Earth (it certainly seems to be). The film works either way.

Or maybe "films" is more accurate; "Melancholia" plays out in two acts. The first is a black comedy about the marriage of Justine (a brilliant Kirsten Dunst), a severely depressed bride, to her optimistic groom, Michael (Alexander Skarsgård). The wedding is held at the castlelike home of Justine's sister Claire (Charlotte Gainsbourg) and her husband, John (Kiefer Sutherland), and it cost a fortune, as John frequently reminds everyone.

The problems start out small and grow larger, ranging from tardiness to a wildly inappropriate toast on marriage from Justine's mother (Charlotte Rampling) to Justine skipping out on the festivities for a large chunk of time to take a bath. It just gets worse from there -- a lot worse. Though maddening, Justine's behavior is accepted for a time (which is somewhat maddening in itself), but there are also funny bits, many of them provided by Justine's father (John Hurt), a boozy old flirt who pretends to steal the place settings.

The second act picks up the day after the wedding at Claire and John's home. Justine is now so depressed she's practically catatonic. John, meanwhile, is obsessed with Melancholia, a planet hidden behind the sun that is hurtling toward Earth. Online reports predict certain disaster, but John assures an increasingly worried Claire that it will in fact miss Earth -- it will come close enough for armchair astronomers such as himself to get excited, nothing more. But is there hesitation in his voice; perhaps he's trying to convince himself. Certainly whatever he's selling, Claire isn't buying. She becomes more and more distraught, terrified at what will become of their son, Leo (Cameron Spurr).

A strange thing happens with Justine: As the potential for disaster approaches, she becomes stronger, as if she relishes the end of days. "The Earth is evil," she says. "No one will grieve for it."

Von Trier is explicit in what this all means -- nothing new for him, but far more effective here than in such films as "Antichrist," which, with its explicit depiction of genital mutilation and more in a study of the devastating effect of tragedy on a marriage, existed to outrage, not to move.

"Melancholia" the film is beautiful. Melancholia the planet is beautiful; the light reflected off it makes the night beautiful, as well. Pay attention to the sound of the film -- not just the use of "Tristan und Isolde," but the growing drone as Melancholia draws closer. The climax of the film is a form of sensory overload, piling on until the audience, and the planet, can take no more.

That's no spoiler; von Trier begins with the end, in a stunning sequence of shots. What's important here isn't something so mundane as a spoiler alert. Instead, this is a film about feeling, experiencing emotions good and bad (and not as much bad as a description of the plot makes it sound). "Melancholia" is an intense, exhausting experience. That may not sound appealing, and for some, it won't be. But nor should it be off-putting. Proceed with caution, perhaps. But proceed nevertheless.