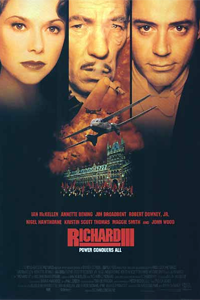 Ian McKellen plays Richard III, and he's a twisted, blackened, serpentine, lurching, spitting, menacing villain with no redeeming qualities whatsoever. He is so hateful, it is easy to see why the Academy overlooked him for a well deserved Best Actor nomination.

Richard III is a brilliant movie, one of the best Shakespeare adaptations I have ever seen. It has been updated from the 1500's to the 1930's, but in setting only. Kings are still kings and dukes are still dukes, but there are also trucks, trains, tanks, guns, suits and ties and film. It moves fast, at one hour and forty-five minutes, and an impressive chunk of that is non-speaking visual scenes. The opening scene in particular is tremendous.

The movie takes joyous liberties with Shakespeare's dialogue. The famous line, "a horse, a horse, my kingdom for a horse" is spoken as Richard's jeep is stuck in the mud. Richard begins his "winter of our discontent" speech into a microphone in front of his entire family and guests at an elegant ball, then finishes, just for us, the viewing audience while urinating in a restroom. It is here that he delivers the chilling "I am determined to prove a villain" line. In fact, Richard often speaks straight to the camera when the mood strikes him. He is the only one who knows we are there, and it makes him even more menacing.

The cast is a dream list of incredible actors and actresses. While McKellen steals the show, we also have Nigel Hawthorne (Academy Award nominee for The Madness of King George), the great Maggie Smith as Richard's mother, character actor Jim Broadbent ( Bullets Over Broadway), Kristen Scott Thomas ( Four Weddings and a Funeral) and Yanks Annette Bening and Robert Downey Jr., one of the finest actors of his generation.

It's becoming easier and easier for people not acquainted with Shakespeare to enjoy movies based on his work. This is one of the best, for both fans and non fans alike.