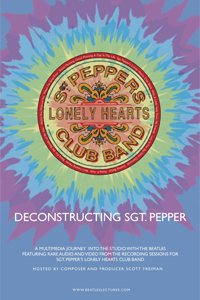 Scott Freiman combines his love of the Beatles with experience as a composer, producer and engineer to deliver unique lectures about the Beatles. He moves past the personalities of the four Beatles to uncover the reasons why their music continues to be loved by millions.

The Beatles' Sgt. Pepper's Lonely Hearts Club Band is one of the most influential albums of our time. In the history of popular music, there is "Before Sgt. Pepper" and "After Sgt. Pepper". Rolling Stone described it as "the most important rock & roll album ever made, an unsurpassed adventure in concept, sound, songwriting, cover art and studio technology by the greatest rock & roll group of all time."

In Deconstructing Sgt. Pepper, composer, musician, and Beatles expert Scott Freiman looks at Sgt. Pepper from multiple angles, exploring the history behind the music. Using rare and unreleased recordings, Scott walks the audience through the construction of songs from take one to the final version. You are guaranteed to leave amazed at the Beatles' innovation in the studio, and have a newfound appreciation for the writing of Lennon, McCartney, and Harrison and even the drumming of Ringo Starr!

Some of the highlights of the lecture include the following: