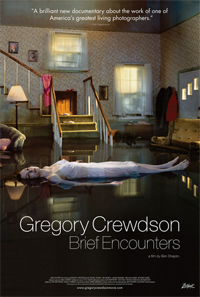 “Can you look sad?” the photographer Gregory Crewdson asks a young mother as she gazes with delight on her gurgling newborn.

For Mr. Crewdson, whose painstakingly constructed images seem to yearn for some impossible human connection, melancholy is as integral to his vision as a fog machine and the mystical caul of twilight. Frozen in a cheap motel room or a snowbound diner, his subjects pose with beaten-down expressions, encouraging us to create our own narrative. It doesn’t have a happy ending.

In “Gregory Crewdson: Brief Encounters,” the director Ben Shapiro accompanied Mr. Crewdson from 2005-9, focusing primarily on the creation of his major series “Beneath the Roses.” Originally conceived as a movie (Mr. Crewdson admits to being profoundly influenced by David Lynch’s “Blue Velvet”), the photographs have a theatrical resonance that Mr. Shapiro sees no need to embellish.

Instead, he listens as this Brooklyn-raised photographer recalls a childhood fascination with the work of his father, a psychoanalyst who saw patients in the family basement, and a stint with the band the Speedies. Their sole hit was the prophetically titled “Let Me Take Your Photo,” and it seems a long way from that bouncy ditty to the dioramas of despair that haunt this film. But though the medium has changed, the performer — whether on obsessively appointed sets or elaborately tweaked outdoor locations — remains evident.

Returning again and again to the sapped small towns of western Massachusetts, Mr. Crewdson is an artist incurably hooked on decline. “He shuts streets down and does wacky stuff,” a self-described junk picker (soon to feature prominently in the wackiness) tells us, as Mr. Crewdson, trailing an entourage of lighting and construction experts, snaps emptied-out car lots and yawning homes.

But even if, as the writer Rick Moody suggests, a swipe at capitalism is implicit in these photos, it doesn’t distract: the flotsam of a failed economy, like the imprint of long-ago family vacations, is just so much grist for the forlorn fictions their maker labors so obsessively to express.

With marvelous discipline, Mr. Shapiro crams a wealth of material into a tight 77 minutes, smoothly communicating the group effort required to achieve the perfect shot. A few intimates, like Mr. Moody and the photographer Laurie Simmons, show up to offer perspectives on the work, but Mr. Crewdson’s unsettling ability to evoke the ineluctable void between observer and observed — and between one human being and another — is beyond the reach of words. Easier to articulate, perhaps, are the layers of need that drive his efforts, resulting in images that he views as “backdrops for a more submerged psychological drama.”

That drama, the film suggests, began way back in a Brooklyn basement, where a father once listened to the secrets of strangers. Now his son, through the magic of art, is able to imagine what those secrets might have been.