The Mystery of Chess Boxing 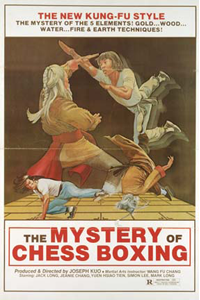 Dan Halsted (head programmer at the Hollywood Theater in Portland) drove a semi-truck to Vancouver to rescue a rare collection of 35mm Kung Fu films. This is your one chance, barring crazy luck or a trip to Portland, to ever watch these prints on film and in their original aspect ratio.
The original Ghostface Killer is on the loose! A vicious villain with an unstoppable five element technique, Ghostface is killing off all his old rivals. Meanwhile, a young student tries to learn kung fu and is taken under the wing of an old chess master. The basics of chess prove to be the same as the basics of fighting, and eventually the heroes will have to fight Ghostface Killer, who verbally insults his opponents as he annihilates them. A true classic, and obvious favorite of the Wu Tang Clan, directed by Joseph Kuo. — Dan Halsted

The Mystery of Chess Boxing