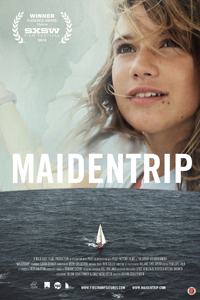 Dutch authorities tried to stop her, and editorials called Laura Dekker delusional, spoiled, insane. On the evidence of the documentary Maidentrip, receiving its world premiere at SXSW, the young sailor is as grounded, resourceful and clearheaded as anyone could hope to be. In 2012, she fulfilled her “delusional” goal and became, at 16, the youngest person to sail around the world solo.

Jillian Schlesinger’s first feature, made in collaboration with Dekker and composed largely of footage that the hardy adventurer shot herself, is both low-key and lyrical as it focuses on the mundane and the magnificent. The well-crafted film might not be destined to make theatrical waves, but it has enough cinematic oomph to draw niche interest in select markets. And given the international media attention Dekker’s journey received, Maidentrip is a sure fit for broad-based small-screen exposure.

Beginning with a Kickstarter campaign, New York-based Schlesinger provided her subject, who set out in 2010 without a follow boat or support team, with a Sony Handycam and mounted GoPro cameras. Novice camera operator Dekker captures the stillness of the open sea as well as the “super awesome” rainstorms and rough winds that toss her 38-foot ketch and sometimes create disasters in the compact kitchen.

The director also gave her lists of topics to address on camera or into a tape recorder during her downtime. What emerges, onscreen and in voice-over, is a preternaturally self-confident teen who doesn’t subscribe to her generation’s social-media egocentrism. When she says, "I don’t like when people tell me what to do," it’s not an expression of mere adolescent impudence but the voice of someone who knows what she wants and is willing to do the hard work to get it. Fame and publicity are ordeals for her, not goals, as her bristly impatience with a reporter demonstrates. Repulsed by Western conformity and materialism, Dekker quite pointedly arranges for the finish line of her circumnavigation to be somewhere other than Europe.

Schlesinger doesn’t get into the nitty gritty, but Dekker’s trip was prefaced by a legal battle in which the Netherlands’ child-welfare bureaucracy sought custody of the then 13-year-old to prevent her from embarking on her solo trip. After 10 months, she prevailed. “They tried to break Laura down,” her father notes, “but she’s too strong.”

The inventive, moody score by Kentucky-based musician Ben Sollee is a fine enhancement to the material Schlesinger has selected to shape her tale of a brave soul eager to explore the wide world. With the help of lovely watercolor-style maps by animation house Moth Collective, the film charts the progression of the trip, interweaving material from family archives to provide the basic backstory.

Born during her parents’ seven-year sailing trip, Dekker is at home on the water; when her folks divorced, she stayed with her shipbuilder father to pursue her passion. Their life is anything but privileged. The Guppy, the boat of Laura’s landmark trip, was a wreck they bought cheap and refurbished themselves.

Director Schlesinger rendezvoused with Dekker at various ports along her route, and the film includes footage of her traipsing around St. Maarten, the Galapagos Islands and French Polynesia, among other picturesque locales. The beauty of the settings notwithstanding, her time on land at first has the so-what feel of home movies, but through the glimpse of her bond with an older couple, a portrait of the sailing community comes into poignant focus.

As the months go by, Dekker’s interest in being ashore lessens and, as for countless sailors before her, the solitude of the sea is what matters. Along the way she braves the treacherous Torres Strait, weeps at the company of a pod of dolphins and casually mentions that she’s chosen a certain route to avoid pirates. Through it all, she reveals only as much as she wants to reveal. The film’s final surprise is an apt illustration of this young woman’s singular combination of forthrightness and reserve.