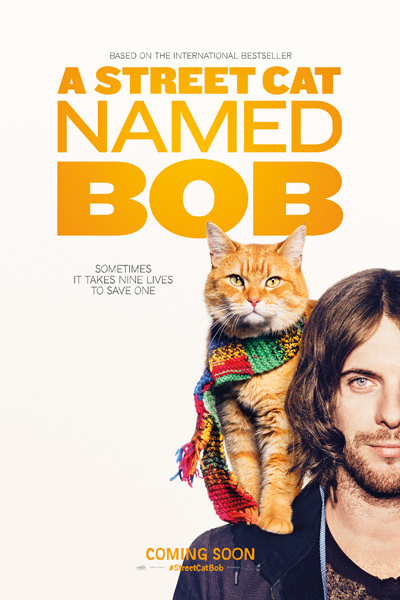 Adapted from James Bowen’s 2013 bestselling memoir, “A Street Cat Named Bob” is a rewardingly unassuming, tough and tender portrait of a drug-addicted London busker whose ill-fated life takes a surprising turn after a ginger tabby turns up in his kitchen.

He’s thrown one last lifeline by a no-nonsense counselor (Joanne Froggatt from “Downton Abbey”), who puts him in a methadone program and finds him a no-frills flat in a dodgy neighborhood.

Although the road to recovery is looking rocky at best, he encounters redemption in the unlikely guise of a stray tom with a persuasive purr who proceeds to insinuate himself into all aspects of Bowen’s life, including a budding relationship with his bohemian vegan neighbor (Ruta Gedmintas, channeling young Daryl Hannah).

While this could easily veer toward Disney cute, veteran director Roger Spottiswoode, whose output has been spotty in recent years, returns to form with a perfectly weighted redemptive story that engages the heart without shying away from the darker aspects of Bowen’s recovery.

And although the two-legged cast is uniformly terrific, it’s the feline performance — by none other than the real-life Bob the Cat — that handily steals the show.

With just a single, soul-penetrating gaze from Bob, any attempt at resistance is hopelessly futile.