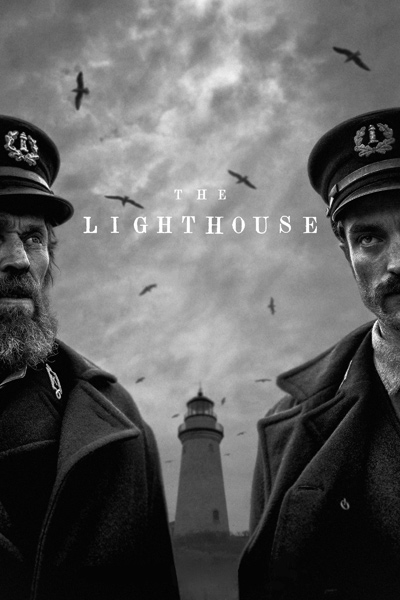 Robert Eggers follows up his The Witch, an anthem of a young woman's sexual development and the chaos it brings a Puritanical society bent on controlling it, with a retelling of the Prometheus myth, in which our erstwhile hero tries to steal knowledge from a wizened and jealous "father." Ephraim Winslow (Robert Pattinson) arrives on a remote rock to tend a lighthouse in a perpetually grey, miserable, rain-slashed season. His length of term is two weeks, and he's given a boss in lighthouse master Thomas Wake (Willem Dafoe), who's intent, it would seem, on making it feel like an eternity. Wake holds the keys to the light-chamber of the lighthouse close to him at all times. He forbids Ephraim from making the trip to the top, relegating him to the shitwork of maintaining human structures on a plot of land violently inhospitable to such things and warning him not to harm a seagull that torments him. "They're the ghosts of dead sailors," he growls, and the reference to Samuel Taylor Coleridge's "Rime of the Ancient Mariner" rebounds off these rock and clapboard walls. Of course Ephraim harms the sea bird and wears his diminutive albatross metaphorically around his neck for the rest of forever as two weeks stretch into an infinite abyss of unimaginable filth and atrocity.

It all hinges on a secret Ephraim is keeping, and he tells it finally after a drunken night of dancing, fighting, puke, piss, and blood. His reward? Wake taunts him for "spilling the beans" and a cycle of madness and murder begins. The Lighthouse is so spare and strange that it tips itself immediately as metaphor or allegory. In the Prometheus story, Prometheus the Titan steals fire from Heaven to give to his creation, mankind, so that they might fend off extermination by a troubled Olympus. It's the Eden story in which knowledge is the thing that prevents people from happiness, distilled in this telling into a man intent on stealing the key to the top room of a lighthouse in order to finally know himself. The scenes where Ephraim gets his wish are so stylized they play like a dream or fantasy. Does he really touch the light? Does it burn him? Does it feel good? The rapture of knowledge is presented as all-consuming and inevitably destructive.

His Icarian descent immediately after--a reference to another cautionary tale about too much knowledge--suggests that what Eggers is involved in through his first two pictures is the exploration of how film is the vehicle of our cultural mythology now. In this communal act of watching, in a dark cave before a flickering light, we learn the identities and proclivities of the monsters that drive us. The Lighthouse is Ovid by way of the British Romanticists (who discovered the geography of the unconscious)--and Chekhov and Kafka, Lovecraft and Bergman. Whether it be the desire to control female sexuality in The Witch or the horror of exploring the labyrinth of the self only to find the minotaur, your own deformed bastard issue, in The Lighthouse, Eggers engages us in a struggle for consciousness that is as ancient as it is essential. What separates his films from others who want to play in this same arena is that they are themselves inscrutable texts until their final moments, which serve as a guide to reflection. They act, in other words, like his heroes act. Like we act. We stumble through horror and misadventure to find out too late we were part of a play that's been running since before we started writing it down. And don't we feel stupid and naked, then?