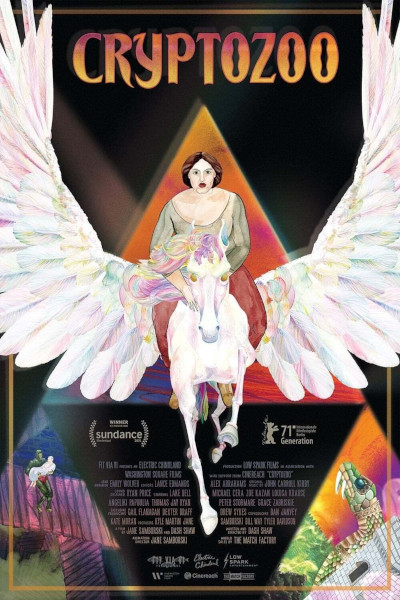 Visionary comic book writer/artist/filmmaker Dash Shaw's vibrant, fantastical animated feature follows cryptozookeepers through a richly-drawn hallucinatory world as they struggle to capture a baku (a legendary dream-eating hybrid creature) and begin to wonder if they should display these rare beasts in the confines of a zoo, or if these mythical creatures should remain hidden and unknown. Featuring the voice talents of Lake Bell, Zoe Kazan, Michael Cera, Louisa Krause, Peter Stormare, Thomas Jay Ryan, Grace Zabriskie and Angeliki Papoulia, CRYPTOZOO is written and directed by Shaw, with Jane Samborski directing the stunning animation.

Utterly bizarre in the best possible way, this lovingly handmade animated feature by writer-director Dash Shaw (originally a comic book/graphic novelist) isn't like anything you've seen before. Unless, that is, you've seen Dash's previous feature, My Entire High School Sinking Into the Sea, a wacky work of wonder that does just what it says on the tin. Dash's followup dives deeper into a world of counterfactual fantasy, one drenched in a nostalgia for the hippy values of the 1960s that could only come from someone too young to have actually lived through the era. But while a certain disarming naivety infuses the work, it nevertheless packs an evocative punch, with a moral message about intolerance and the need to protect more vulnerable species. It's also one of the few films that could potentially induce a psychedelic trip with its visuals alone.

The story itself is sprawling and (truth be told) a bit of a mess. It's around 1967 and veterinarian cryptozoologist Lauren Gray (voiced by Lake Bell) works with her mentor Joan (Grace Zabriskie) to keep a Disneyland-meets-zoo sanctuary for "cryptids" – magical creatures like gorgons, semi-released krakens (they're kept in enclosures), winged horses and the like. Gray endeavours to find other cryptids in order to protect them, but she's competing against shady adversaries who want to harness the creatures' powers for military use. If all that sounds cutesy sweet, be advised that there is a lot of nudity here, and an animated orgy the likes of which hasn't been seen since the X-rated Fritz the Cat came out in 1972.

The actual animation is very simple, composed mainly of frame-by-frame drawings where only tiny elements within the composition move at any time – a technique that's as old as cinema itself. But with these awkwardly proportioned figures, Dash's graphic style draws on 19th-century illustrations, especially the Golden Dawn tarot card deck that's directly referenced here, as well as animator René Laloux's Fantastic Planet, much-loved kids' book D'Aulaire's Book of Greek Myths, and the quasi-art nouveau look of 1960s psychedelic illustration. The animation has used some computer work here and there but the vast majority of the movie has been done the old-fashioned way – quite a thrill for animation geeks of any age.