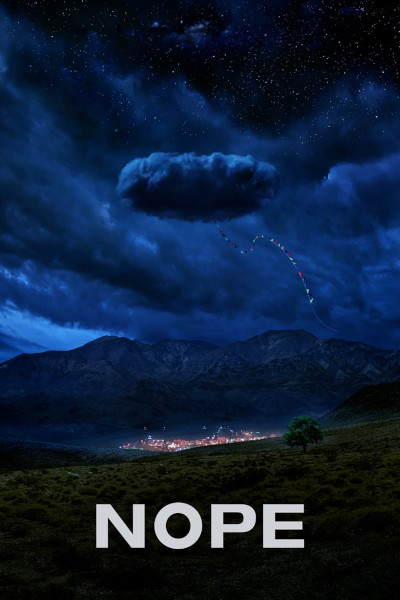 In Nope, horse wrangler/trainer Otis “OJ” Haywood Jr (an understatedly intense Daniel Kaluuya) tries to dodge the deadly attentions of whatever skybound phenomenon is terrorising his California ranch by studiously avoiding eye contact. OJ’s family, which includes ill-fated father Otis Sr (Keith David) and fame-seeking sister Emerald (Keke Palmer), proudly sell themselves as direct descendants of the unnamed jockey featured in Eadweard Muybridge’s late 19th-century images of a rider and horse – a precursor of modern cinema (“since the moment pictures could move, we had skin in the game”). Now the Haywood ranch provides horses for film and TV productions (“the only black-owned horse trainers in Hollywood”), although struggling OJ may have to sell their stock to former child star Ricky “Jupe” Park (Steven Yeun), who runs a nearby theme park. But then mysterious signs in the sky offer either an unexpected opportunity, or a “bad miracle” …

Despite there being extensive spoilers everywhere about what OJ is up against, it’s best to see Nope unprepared and spend a healthy amount of time wondering “WTF is going on?!” Suffice to say that Peele draws on a wide range of influences, from the awestruck human befuddlement of Close Encounters of the Third Kind to the eerie, angelic forms of the Japanese TV series Neon Genesis Evangelion, and (accidentally?) the far-too-pleased-with-itself silliness of M Night Shyamalan’s The Happening. He also picks up cine-literate threads from Antonioni’s swinging 60s parable Blow-Up, Sidney Poitier’s 70s western Buck and the Preacher (a poster for which hangs on the ranch wall), Katsuhiro Otomo’s 80s manga Akira (which Peele was once tapped to remake) and even Ron Underwood’s cult desert-bound 90s monster movie Tremors. More importantly, he rips off (or “pays homage to”) the iconic chase sequences from Jaws, with inflatable air dancers standing in for those floating yellow barrels that made Spielberg’s shark all the more terrifying when unseen.