Plagues and Pleasures on the Salton Sea

With Chris Metzler In Person 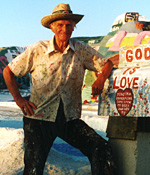 California dreaming meets good old American eccentricity and ecological emergency in the story of the Salton Sea -- or, as narrator John Waters puts it in this alarming yet highly entertaining documentary, "utopia and the apocalypse meet to dance a dirty tango."

In little more than 70 minutes of "Plagues & Pleasures on the Salton Sea," directors Chris Metzler and Jeff Springer cover the century-long history of the manmade body of water. Traveling its periphery, interviewing the nonconformists who populate its beachfront communities, the filmmakers provide vivid evidence -- eerie, wacky, poignant -- of an idea that won't quite die. Desert-tinged lounge instrumentals by Friends of Dean Martinez provide fitting accompaniment to the weird saga, a selection at the Palm Springs and Santa Barbara film festivals.

The Salton Sea represents a fascinating chapter in Southern California's ongoing battles over water. Essentially a giant puddle, its only inflow is agricultural run-off from the Imperial Valley, valuable water that has been sold out from under it in deals with more powerful coastal towns. Fifty miles south of Palm Springs and once its rival as a magnet for tourists, the wealthy and glamorous, the "California Riviera" was, during its heyday in the 1950s and '60s, a sportsfishing, waterskiing paradise in the middle of the desert. Old promo films and photos illustrate its retro glory.

A series of devastating floods ended all that. The battered remnants of marinas and yacht clubs testify to better times, and street signs in the middle of empty stretches of sand recall developers' visions that never materialized. Warm temperatures and the water's naturally high salinity create an endless chain in which algae thrive, fish fight for oxygen and die in the millions. Although the water is not toxic or polluted, its smell is hardly an enticement.

Some longtime residents are resigned to the sea's slow death; others are fighting to save it, though they lost one of its greatest champions when Sonny Bono died. In the balance is the fate of millions of wintering birds for whom it has become a key habitat -- not to mention such endangered species as elderly nudists, Hungarian freedom fighters and the self-taught artist building a Christian-themed Salvation Mountain from mud and donated paint. (S. Linden, Hollywood Reporter)

Plagues and Pleasures on the Salton Sea