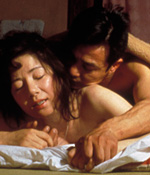 Arguably one of the most influential Japanese films of the 1970s, Shohei Imamura's Vengeance Is Mine is a cold, cynical and at times rather disturbing look at a psychotic criminal's downward spiral.

The story follows a man named Iwao Enokizu (Ken Ogata). Through a series of flashbacks we learn how his relationship with his father, Shizou (Mitsuko Baisho), soured and subsequently how that affected him in his younger days. At the end of the Second World War he steals a Jeep from some American G.I.'s, and when he's captured he winds up in jail. When he's let out, he has to deal with his wife, and when Iwao kills two men that he works with, it all starts to go downhill fast. Iwao hides, and he continues to kill and to steal, and all the while the authorities close in on him.

Shohei Imamura directs the film in a sort of loose documentary style and it's not a stretch to see how this film could have influenced more modern, avant-garde fare such as Henry: Portrait Of A Serial Killer or Man Bites Dog. By placing a madman as the central character of the story and focusing on his actions rather than those of the police out to apprehend him, we are almost forced to root for the bad guy here. Obviously Iwao is a despicable man, a worthless human being who takes advantage of everyone around him, but the film makes us care for him in a twisted sort of way. Sure, he's a bastard, but he's slick and clever and even rather charming when it suits his interests and because of this we can see how his victims are pulled in and as such, he's even all the more frightening. The film uses frantic camera work to capture some of the more intense scenes.

Not for the faint of heart, the film is exceptionally dark (though not without humor) and some of the scenes of sexual violence could still be considered quite strong, although the movie is so well made that it doesn't feel exploitative or unnecessary. Even if we don't know why he does what he does, he's still a darkly fascinating character who proves that, like it or not, actions still speak louder than words. (I. Jane, DVDtalk)