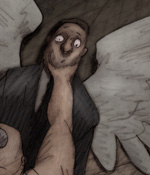 In Idiots and Angels, a masterpiece of cartoon noir, animator Bill Plympton sketches the gardens between allegorical good and evil as a set of angel's wings sprouts from our misanthropic antihero's shoulder blades overnight.