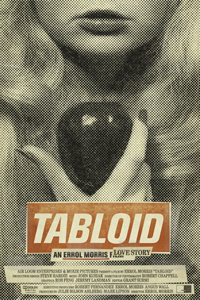 A tale of obsession and abduction, self-delusion and sexual confusion, Errol Morris' Tabloid stands as an almost giddy affirmation of the old cliche: Truth is stranger than fiction.

Based on the true-life exploits of Joyce McKinney, a former Miss Wyoming - a woman with a sunny smile and a sky-high IQ - Tabloid is like a detective story steeped in surrealism. This stuff couldn't have happened, could it?

For a juicy stretch in the late '70s, McKinney found herself on the covers of the Mirror, the Daily Express, and a stack of U.K. scandal sheets, accused of kidnapping Kirk Anderson, a Mormon from Utah, and holding him prisoner in a cottage in the English countryside and forcing him to have sex. The headlines screamed: "Kidnapped!" "Sex in Chains!", accompanied by a provocative pic of a naked McKinney - dug up by an intrepid reporter looking into her past.

The story doesn't end there.

With McKinney cheerfully explaining herself for Morris' unwavering Interrotron camera (and with recordings and journal entries, TV footage and old home movies for embellishment and elucidation), Tabloid paints a picture of a woman in relentless pursuit of her "special guy." The fact that that guy, Anderson, doesn't sit for an interview makes McKinney's seemingly rational explanations seem all the more, well, out there.

Morris, who has explored the nature of truth and reality in documentaries serious (The Thin Blue Line, The Fog of War) and amusingly strange (Gates of Heaven, Vernon, Florida), ropes in a radio show host, a reporter, a photographer, and an airplane pilot to support, debunk, and elaborate on McKinney's narrative. It's a collection of mugs that Raymond Chandler couldn't have invented.

Filmmaker Morris is having a grand old time here (how can he not?), deploying a dizzying collage of tabloid headlines and archival clips, winking and nudging, underscoring and overdoing it. There's nothing mean-spirited, or judgmental, about the way Morris goes about his business - he must have been kicking himself with glee as one bizarre strand of the story unravels to reveal the next.

And not to give anything away, McKinney's obsessions don't stop with the love of her life, that unsuspecting fellow, Anderson. In its dogged quest of the facts, Tabloid leaves no stone unturned.