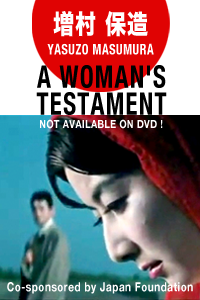 Three stories about "immoral" women and their money: the first (by Masumura) is about a nightclub waitress who cares only for cash but falls in love with a young man on the night before his wedding; the second, Women Who Sell Things at High Prices (Ichikawa), involves a young real estate agent who tricks a novelist into buying a beach house; and the last (Yoshimura) centers on an ex- geisha who inherits a restaurant from her husband and promptly falls in love with a forger. Yukio Mishima admired the "Poe-like sweetness" of Ichikawa's tale. A fascinating entrée to the burgeoning Japanese New Wave with its sexual frankness and irreverent attitude, A Woman's Testament features superb color 'Scope cinematography and three top actresses as the enterprising trio. — James Quandt