The Woman Who Touched the Legs 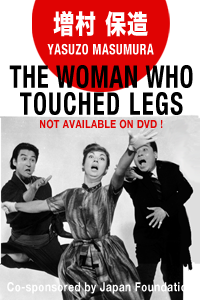 Of the five Masumura films selected, this is the only one that falls under the rubric of being a sexy screwball comedy. Tellingly, it is also a remake of a film by one of Masumura's mentors: Kon Ichikawa. Ichikawa's version of THE WOMAN WHO TOUCHED LEGS (1952), is itself a remake of Yutake Abe's original of the same title, which was made in 1926. It is thought that Masumura at one point denounced his mentors Mizoguchi and Ichikawa, but he later tried to reconcile with Ichikawa, his old boss (and a big influence), by taking on this remake of a female pickpocket who picks the wrong pocket (or, given the romantic angle, perhaps we should say it's the right pocket after all).

The Woman Who Touched the Legs