Everyday Sunshine: The Story of Fishbone

Chris Metzler will NOT be attending after all 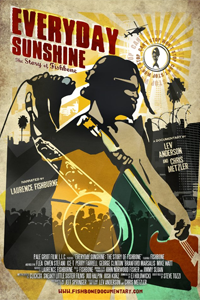 Before we talk about the Fishbone documentary, I need to tell you a little bit about Fishbone and why the band is important to me personally. Because sometimes context is all. I learned about Fishbone from my little brother. He introduced me to them at the same time that I first heard Faith No More and Living Colour, to name a couple. I came on board with The Reality of My Surroundings, which remains my favorite album. So that means my introduction was somewhere in the 1991-1992 timeframe. With Fishbone especially, I was drawn to the mad talent of the band, plus their energy. They sounded like organized chaos incarnate with a horn section. And they had things to say without always having to have Something To Say, if that makes sense.

Fishbone has meant a lot to me ever since. I've managed to catch them live three times. The first was at Lollapalooza, the second with them opening for 311 (we were there to see Fishbone) and the most recent time in a relatively small club here in Atlanta. I have followed their progress throughout the years, lost my connection to them with a couple of albums that just didn't speak to me the same way others have, and found myself rekindled with them, mostly due to the latest show.

What I knew is that they lost members of the band over time. I knew Kendall Jones, original guitarist, had joined a cult and an attempt at doing an intervention on him had left Norwood Fisher, bassist, in danger of going to jail. I saw them change personnel, saw them sort of lose the full spark of their stage presence and then saw them come thundering back. And even though I never knew the details about what the hell had happened to them over the years, I still followed the music. They still have something to say to me and still mean something. There is a reason why they are name checked in my novel as the favorite band of one of my protagonists.

Everyday Sunshine: The Story of Fishbone is like the feature-length bonus documentary to the DVD of the band's life. It is, for me, a long-time fan, a series of answers to questions I didn't even know I had. Things that I had heard about in the news or--more importantly--things I had heard coming through the music make perfect sense when put into the context given by this film.

There's not much one can say about the synopsis that the title doesn't, except for a couple of quick bits here. First, you know what you're in for when you cut from early 90s Fishbone rocking out to a packed house to the nearly present day and they're playing a set to a bunch of senior citizens in a town square in Hungary. Watching that, my heart sank. Second, if you are a Fishbone fan, as Rob said in a recent Weekend Justice, you are elated when you find another one. Because as the docu demonstrates, Fishbone should be huge. They should be a band with an immense following instead of just a sizable cult following. They should be the band that Is instead of the band that Inspired The Others.

If it were just a factual parade of info about the band, that might appeal to me and my fellow Fishbone fans--and probably no one else. But the filmmakers do what a good docu should do and expand the scope. By showing us the fracturing of the band, by showing us the friction between the last two original members standing by the end of the film--frontman Angelo Moore and Fisher--and by showing us the pain associated with wanting to create art on your terms and yet pay the rent, you get something else: a film about music and that any musician can relate to. A film about art any artist can relate to. Hell, when you tap into the notion of friends who leave and wander back into your path years later and What That Means, it's something everyone can relate to. And when you see it happen in the film, it's hard not to be moved by it. Because when you've hit a certain point in your life as an artist, this all Resonates.

It's also the presentation that sells it. Yes, it's great to have Laurence Fishburne narrating. But it's much more impressive considering the array of musicians, actors and other people who got on camera to express what they know and feel about Fishbone. Les Claypool. Vernon Reid. Flea of the Red Hot Chili Peppers, who comes off like a sage philosopher of sorts, to be honest. They all provide commentary on what's happening as the story of the band unfolds.

There's also the animation. Not only do you get bits and pieces here and there, illustrating what's going on but the introduction of the band members in a somewhat Fat Albert-esque animated sequence is ridiculously awesome. It will have you wondering, like I did, why Fishbone never had their own animated cartoon where they drove around the country, ripping up stages and solving crimes. This sequence alone is worth the price of admission.

And not to sound like I'm selling you a blender, But Wait There's More. There is a formidable amount of footage involved here, from their early gigs up to the present day. You're amazed by the early footage that so much of it is extant. You're amazed by the recent footage because of how freaking candid everyone is being. The filmmakers were given all access...and then some. It's just astounding.

As a Fishbone fan, this is all I was expecting and more. I am deeply impressed and grateful for the film because it does capture the spirit and the story of a band that's meant a great deal to me as I've grown into adulthood and now my old age. But it's more than that: I'm grateful because it does the story justice. It's not just the story of Fishbone--it's the story of creating art, living with oneself, living with others, and moving on with things. It's also a story of how sometimes you just simply cannot stop, no matter what. Just fantastic.

If you are a Fishbone fan, you, like me, will probably want to give the entire band a manly hug and then buy them lots of beer. Hell, I've got a round for the filmmakers as well.

Everyday Sunshine: The Story of Fishbone