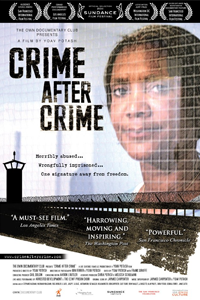 Yoav Potash's moving, vivid documentary "Crime After Crime" will make you both angry and tearful, sometimes at the same time. It's the story of Deborah Peagler, a California woman who, when we first meet her, is past the 20-year mark in a life sentence for the 1982 murder of her boyfriend, Oliver Martin.

But the story is far more complicated than that: We learn that Peagler, a likable woman with a warm smile and soaring voice in the prison choir, was a victim of domestic violence at Martin's hands, that he forced her into prostitution and may have molested her daughter. She insists nonetheless that though she did drive him to an ultimately fatal assignation with two neighborhood gang leaders in a park, she did not mean for him to be killed.

"I just wanted him to leave me alone," she says quietly of the man she met when she was 15. Her voice breaks, remembering the horror from two decades ago.

Potash lets us follow the ups and downs of the case over more than five years of filming. We meet Peagler's family members (and Martin's, who support Peagler's release), and come to know a woman who never gave up hope, even when the story takes on a tragic final twist. The film is ultimately a rallying cry in support of domestic-violence victims -- and a portrait of two unlikely heroes.

Land-use attorneys Nadia Costa and Joshua Safran had little experience in criminal law but spent years working on Peagler's case pro bono, motivated by a desire for justice and by their own experiences with domestic abuse. The gentle voiced Safran tells the camera that his mother was an abuse victim and that he, at 9, was powerless to help her -- which makes him all the more determined to see Peagler walk away from prison. On that day, says Safran, he wants to bring his young daughter to witness the moment -- "because this," he says emotionally, "is what lawyers do."