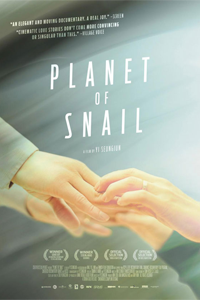 Gentle, simply told love stories are as rare in documentaries these days as they are in narrative film. That alone makes Yi Seung-jun’s “Planet of Snail” a standout.

In Young-Chan and Soon-Ho, the Korean director has a classic subject, a devoted couple united in negotiating the world’s obstacles. Poet and essayist Young-Chan is deaf and blind; he can speak, but his wife converses with him by tapping out signs on his fingers. Soon-Ho appears to have a spinal condition that confined her height to about that of an adolescent.

The movie adamantly refuses to sentimentalize these facts. And when, for example, the two spend much of a day working to change a single light-bulb in their Seoul apartment, the thought that lingers is that we should all have that sort of concentrated teamwork in our marriages.

Both have faces that the camera adores, but their hands are most beautiful of all. The many shots of Soon-Ho’s perfect fingers tapping out words to her husband are some of the most arrestingly emotional moments in the film.

There’s no attempt to satisfy any curiosity about the details of their courtship, or even precisely how they make a living. The boundaries of what’s shown are as elegantly laid out as one of the poems Young-Chan reads. When a dinner guest remarks, with more than a trace of sadness, “I envy the love the two of you have,” he surely speaks for many besides himself.