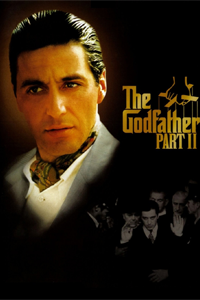 A companion piece in the truest sense of the term, The Godfather Part II garnered as much adulation as its predecessor, if not more. Receiving twelve Academy Award nominations, and again winning Best Picture (and this time Best Director for Coppola as well), the second installment has been rightfully hailed as the best sequel of all time.

The Godfather Part II is a more ambitious production than the original since it attempts not only to tell a pair of completely disconnected stories, but to do so in parallel. The less time consuming of the two presents the early life of Vito Corleone (played by Robert DeNiro) in Sicily and New York, and shows how he came into power. The other tale picks up approximately a decade after the conclusion of The Godfather, and shows the means by which Michael Corleone (Al Pacino), now secure in his position, attempts to expand the family empire into Las Vegas and Cuba.

Michael lives his life and runs his business by two of his father's creeds: "A man who doesn't spend time with his family can never be a real man" and "Keep your friends close, but your enemies closer." There are times, however, when those precepts fail as guiding principles, such as when a betrayal occurs from within the family. Broken trust arising from so intimate a source can be devastating.

In The Godfather, family was more important than anything to Don Vito Corleone. Michael has inherited his father's values and as Part II opens, he is surrounded by the Corleone clan as they gather for his son's first communion. A symmetry between the first and second films is established here - both open with a family assemblage, and each quickly establishes where the power lies as the don "holds court."

The Corleones no longer live in New York. They have moved to Nevada where they are amassing influence with the nebulous goal of some day becoming "legitimate." But the affairs of the East Coast are about to interfere as Frankie Pentangeli (Michael V. Gazzo) arrives to request the don's acquiescence to a hit. Michael cannot agree because such a killing would ruin certain business dealings currently in progress with the powerful and influential Hyman Roth (Lee Strasberg).

Plot and counterplot develop, and Michael becomes the focal point of a web of betrayal and deceit, turned against by those he had sought to protect. Assassination attempts and government probes target Michael, but he fights back using every scintilla of ingenuity he possesses and sacrificing much of his humanity in the process.

For a man constantly battling to keep his family together, a mournful irony of The Godfather Part II is that Michael's efforts succeed only in fragmenting it. If the end of the first film was numbing, this one is shattering. The flashback preceding the final scene presents a stark differentiation of how things once were from what they have become.

A more comprehensive contrast emerges through the lengthy sequences detailing Vito Corleone's rise from obscurity. Showing his arrival at Ellis Island, his early relationship with Clemenza (Bruno Kirby), and his confrontation with Don Fanucci (Gastone Moschin), these segments stand in contradiction to Michael's scenes. Expansion is replaced by slow disintegration, energy and success by pain and failure. If young Vito's era is the Corleone's dawn, Michael's is the approaching twilight.

The danger in interweaving the early twentieth century story with the one from 1958 is that the momentum of either - or both - could be curtailed. While this occasionally happens (most notably in the first shift back to 1917, shortly after the assassination attempt on Michael), Coppola handles the transitions adroitly, keeping the pace consistent enough to limit any sense of jarring or disorientation.

The traditional elements of the Tragedy introduced in The Godfather reach their maturity in Part II. Much of the humanity remaining to Michael at the outset is leeched from him with each deception and setback. Late scenes with a resentful Fredo (John Cazale) and a bitter Kay (Diane Keaton) emphasize the price for Michael of continuing his father's dominion. His flaw is his imperceptiveness and, as is the case for any hero in a story of this nature, its effects are crippling.

Primarily due to the scope of events, Part II is not as tightly-scripted as Part I. While most of the first film takes place in New York (with a few excursions elsewhere), here the settings vary: Sicily, Ellis Island, New York, Nevada, Cuba, Miami, Washington DC. In letting their characters escape the confines of the "old neighborhood", Coppola and Puzo lessen the intimacy of certain interpersonal conflicts.

Visually, many of Michael's scenes have a more gloomy appearance this time around. Especially during the latter portions of the film, the don is shown in severely underexposed settings, appearing as a silhouette. His is a voice from the darkness - a photographic mirror of what's happening beneath the surface.

As the beginning of Part II echoes the opening of The Godfather, so too does the end. Because of the manner in which circumstances are handled and considering the people involved, the impact here is more forceful. The tragic flaw has accomplished its poisonous, inevitable designs. Coppola punctuates both movies with a gut-twisting exclamation point.

Combined, The Godfather and The Godfather Part II represent the apex of American movie-making and the ultimate gangster story. Few sequels have expanded upon the original with the faithfulness and detail of this one. Beneath the surface veneer of an ethnic period piece, The Godfather is not so much about crime lords as it is about prices paid in the currency of the soul for decisions made and avoided. It is that quality which establishes this saga as timeless.