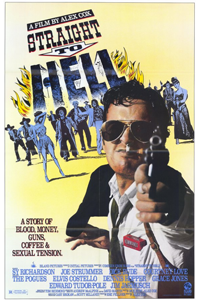 Our recent colleague and now fellow Boulderite, Alex Cox, is known to most for REPO MAN and SID & NANCY, but he also made STRAIGHT TO HELL w/ Joe Strummer, Elvis Costello, Jim Jarmusch, Courtney Love, Dennis Hopper, , Grace Jones, and the Pogues. Tonight, for one night, only, you can see the only 35mm print w/ both director Alex Cox and PRAY FOR RAIN composer Dan Wool in-person!