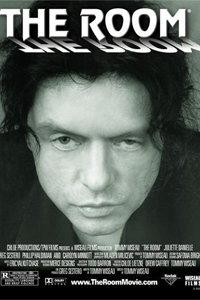 Every now and then, film lovers develop a belated cult for a production that it is brutally clueless yet endearingly inept. Flicks such as "Reefer Madness," "Plan 9 from Outer Space," "Valley of the Dolls" and "Showgirls" achieved a level of cultural significance strictly for being so far removed from the basic tenets of artistic quality and intellectual depth. They could be called anti-classics – they have the love of the audience, if not its respect, yet their failures are cheered as if they were pure victories.

Joining this exclusive club is the first cult movie for this century: Tommy Wiseau's 2003 "The Room." Barely acknowledged during its initial single-screen Los Angeles theatrical engagement, "The Room" has gained an astonishing word-of-mouth cred that has helped fuel sold-out midnight movie screenings – and that's no mean feat, considering the film has been available for years on DVD and through bootlegged downloads. There is even an e-commerce site that offers t-shirts and knickknacks related to this weird offering.

On the surface, "The Room" is fairly simple: a San Francisco love triangle between a banker, his fickle fiancé and the man's hunky best friend. We know this takes place in San Francisco thanks to travelogue-worthy shots that are inserted between most of the key scenes – and that's helpful, since that is the only connection between "The Room" and any recognizable piece of reality.

Quite frankly, "The Room" exists in its own sphere of energy. Nothing connected to its characters, dialogue or actions has any parallel with the quotidian considerations of our daily world. People abruptly appear and disappear without warning, ground shaking pronouncements are made casually before being immediately forgotten, and the web of human interactions are boiled down to sex accompanied with a light jazz soundtrack (for male-female relations) and fisticuffs or underhand football tossing (for all-male bonding). Conversations consist almost entirely of non-sequiturs, which leads the viewer to wonder if the people of "The Room" suffer from an acute form of Attention Deficit Disorder or if Wiseau (who penned the screenplay) only became acquainted with English the day before shooting began.

There is also the problem of Wiseau's performance as the betrayed banker whose world collapses in the course of a few days. A vampiric presence with ghostly pale skin and long jet-black hair, Wiseau addresses his surroundings in a sing-song voice laced with leaden Eastern European accent. His emotional range is stuck in neutral, so every line of dialogue – from his playful "Hi, Doggy!" greeting to a bulldog that is inexplicably sitting on a floral shop counter to his gut-wrenching "Everybody betrayed me! I fed up with this world!" – is delivered in the same low-level tone.

If Wiseau is unable to direct himself into a performance, his abilities to harvest genuine acting from his ensemble is far less successful. Most of the actors appear to have been inspired by the marionettes and automatons of Disneyland's "It's a Small World" exhibit – one-note stereotypes (the menacing drug dealer, the busybody mother, the supercilious psychologist, the giddy best friend) that keep hitting their one note key in the vain hope of turning caricatures into characters.

And yet, "The Room" is such a well-meaning goof that it is impossible to hate the film. Wiseau's endeavor could be viewed as a cinematic equivalent of folk art – primitive in design and execution, yet strangely charming in spite of its obvious shortcomings. It is a prime example of enthusiasm outrunning talent. Though, ultimately, the film's continued cult popularity might suggest that Wiseau is getting the last laugh – even if he doesn't quite comprehend why people are laughing.