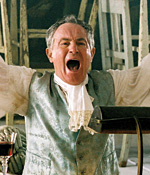 Lunacy is an adaptation, splicing two stories from Edgar Allan Poe with the libertine spirit and rhetoric of the Marquis de Sade. A reminder that art can be challenging, aggressive, hilarious, and repellent all at once. (L. Goldsmith, Notcoming.com)