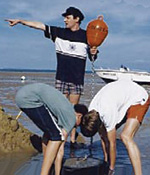 38-year-old Jacques, father of four young boys one day decides to buy a day cruiser with his savings, in the hope that it will bring his family closer. He doesn't know the first thing about sailing, and tells his family that he's the only captain on board, besides God.