A Map With Gaps and Today's Man 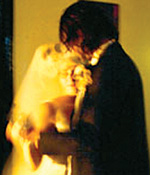 A MAP WITH GAPS is surreal and comic tale of a journey made by the director's father through Soviet Russia in the early 1970s in a van he built and named "Supervan." (Scotland, 2006, 26 mins.) TODAY'S MAN is a loving portrait by the filmmaker of her brother, who is diagnosed with Asperger's syndrome - which allows him to calculate the square root of any number but leaves him unable to read facial expressions.

A Map With Gaps and Today's Man