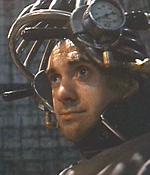 Terry Gilliam's "Brazil," a jaunty, wittily observed vision of an extremely bleak future, is a superb example of the power of comedy to underscore serious ideas, even solemn ones. "Brazil," ... was not scheduled for 1985 release until the Los Angeles Film Critics Association voted it best film of the year.

"Brazil" may not be the best film of the year, but it's a remarkable accomplishment for Mr. Gilliam, whose satirical and cautionary impulses work beautifully together. His film's ambitious visual style bears this out, combining grim, overpowering architecture with clever throwaway touches. The look of the film harkens back to the 1930's, as does the title; "Brazil" is named not for the country but for the 1930's popular song, which floats through the film as a tantalizing refrain. The gaiety of the music stands in ironic contrast to the oppressive, totalitarian society in which the story is set.

The plot itself, from a screenplay by Mr. Gilliam, Tom Stoppard and Charles McKeown, is rather thin; it exists mainly as an excuse to lead the viewer into various corners of an unexpectedly humorous Orwellian world. Mr. Gilliam's answer to Mr. Orwell's Winston Smith is one Sam Lowry, a gray-suited bureaucrat who has a forbidden love, a lively fantasy life and a socialite mother. Ida Lowry (played hilariously by Katherine Helmond), who is constantly in the company of her in-house plastic surgeon, spends most of her time lunching with lady-friends and a bit of it worrying about her son's limited career. So Ida - whose fashion sense dictates that she wear hats that look very much like upside-down shoes - arranges a promotion for Sam. He winds up in an office so small that he has only half a desk and half a poster sharing both with the bureaucrat next door. This change somehow propels Sam into a romance with a woman who may be a terrorist and into a series of hellish nightmares.

Much of the cleverness of "Brazil" has to do with its tiny details, the sense of how things work in this new society. Signs glimpsed in the background say things like "Loose Talk is Noose Talk" and "Suspicion Breeds Confidence," while television advertisements are for things like fashionable heating ducts "in designer colors to suit your demanding taste" (the production design makes sure that heating ducts are everywhere). Politeness counts for everything, as in an early scene where one hapless Mr. Buttle is arrested in his own living room, stuffed into what looks like a large canvas bag, and led away, never to be seen again. At least Mrs. Buttle is given a written receipt for her confiscated husband.

Harry Tuttle, the man the police were actually after until a large bug dropped into a computer and caused a typographical error, is played by Robert De Niro as a combination repairman and commando. Mr. De Niro has only the briefest of roles here, but he makes it count for a lot, as does Bob Hoskins as a sinister fellow passing himself off as a rival repairman. The friends of Sam's mother are also nicely played, particularly Shirley (Kathryn Pogson), who tells Sam shyly that she doesn't like him at all. Michael Palin is both ominous and funny as Sam's friend Jack Lint, and Jonathan Pryce is especially good as Sam. Giving his regards to Jack's twins and learning that they are triplets, Sam responds by saying "Triplets! How time flies."

Also in "Brazil" is Kim Greist as the pretty young woman who fascinates Sam in reality and in his dreams; in the latter, she has angelic blond hair and he appears as a magnificent winged silver creature swooping through the skies. Earlier in his career, Mr. Gilliam might have staged such a scene more facetiously, but here it has a real poignance. For all its fancifulness, "Brazil" and its characters seem substantial and real.