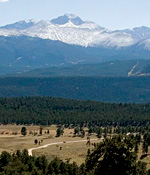 Featuring historical footage of University of Colorado student alpine hikes in the Front Range mountains, this silent color film provides a unique glimpse into the mountaineering lifestyle and familiar landscapes of the past. Live narration by local scientists from CU's National Snow and Ice Data Center and elsewhere.