Angels in the Dust 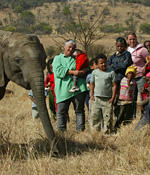 Marion and Con Cloete had it easy: As well-to-do white South Africans with twin daughters, they could have spent their lives comfortably in a ritzy suburb of Johannesburg. Instead, they walked away from their insular life some 19 years ago, and used all their savings to establish in Magaliesberg a school and orphanage now known as Boikarabelo (called Botshabelo at the time the film was shot), as part of a desperate attempt to resist the unimaginable flood of human suffering caused by HIV/AIDS in Africa. The ravages of this disease are already too hideously well-known; South Africa’s suffering has been among the worst on the continent, thanks to idiotic and counterproductive government measures in the face of the growing pandemic. In that one nation alone, six million people of all ages are currently infected; in the village where the Cloetes founded Boikarabelo, 50 percent of the population is HIV-positive.

Louise Hogarth, the director of Angels in the Dust, rightly describes the Cloetes as "a family choosing the spiritual world over the material." But like most truly spiritual missions, their work demands tremendous realism and practicality. Their orphanage is home to 250 children in full-time residence, and feeds and schools upwards of 280 more kids from surrounding villages. What makes this huge job ten times tougher is the fact that, beyond attending to the youngsters' medical, nutritional and educational needs, the Cloetes must also contend with a never-ending stream of trauma: children who have watched their parents die, who have been raped and exploited, who have faced starvation. Wisely, the Cloetes make sure not to sweep anything under the rug, but instead guide their young charges through group activities intended to help them release their rage and ground them in the confidence that they are loved and looked after. As a result, the Cloetes become totally involved in the daily lives of the people, young and old, who need their help. "Our policy here is anybody who asks for help cannot be turned away," insists Con Cloete.

Hogarth has created a moving and truly inspirational document with Angels in the Dust. The film is devoid of narration, but you learn all you need to know from the children themselves as well as from the Cloetes, especially the charismatic and energetic Marion. Hogarth's cameras capture some of the most appalling faces of misery to be found in Africa—a young girl describing how she'd been raped; people at the brink of death from AIDS—but never frame them without the opposing presence of the Cloetes, and the patient determination with which they perform this superhuman recovery effort. The family becomes an emblem of hope and humanity as they struggle to bring healing not just to sick people but to a maimed and confused society, where violence and abuse and exploitation have rushed into the vacuum created by despair and death. Any viewers unwise enough to pass on Angels in the Dust because they think the film is depressing will be cheating themselves, because there isn't a more uplifting film to be seen. Watching Marion Cloete's compassion, wisdom and practicality in the face of unimaginable misery will provide purpose and courage and adrenalin for everyone with their own struggles, big and small.

Angels in the Dust