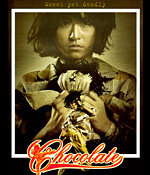 Now, Prachya returns with another pleasingly original film - here the kicky, punchy heroine has autism - and, once again, when planks make contact with skulls, the owners of those skulls look properly bashed-up.

There is, to be sure, a kind of elegance to Prachya's choreography, but it is the elegance of collapsing buildings and felled trees. Watch as Zen (Yanin Vismistananda), who developed her talents by watching TV, beats up a cadre of hooligans on a series of parallel ledges and marvel that Donkey Kong had such a lasting influence on popular culture.

Chocolate... treats the condition of autism with surprising maturity.... It comes as no surprise to learn that more than a few bones were broken making this exhilarating flick. — Donald Clarke, The Irish Times