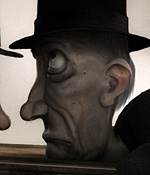 The five Oscar-nominated animated shorts are:

The estimated running time of the Oscar-nominated shorts is 39 minutes. We will complete the program with another 40 minutes of animated shorts.