Portrait of a Pool Shark in a New 35mm Print 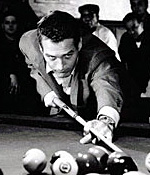 The test of what a man has inside him--the basic Hemingway-style masculine story that's frequently set in the bullring in this country, in the world of sports, especially among prizefighters--is set here in the world of pool sharks. Paul Newman is the young contender, Fast Eddie Felson, and Jackie Gleason is the old champ, Minnesota Fats. But Hemingway would cut out extraneous material, thereby raising the simple, unadorned test to the level of myth; the director Robert Rossen and his co-writer, Sidney Carroll, surround the test with an extra 40 minutes or so of flabby "poetry." The dialogue comes out of the 30s and borrows heavily from Clifford Odets. A character does not ask a simple question like "Are you his manager?" He asks, "Are you his manager? His friend? His stooge?" And there's a tortured, crippled girl (Piper Laurie) who speaks the truth: she's a female practitioner of the Socratic method who is continually drinking her hemlock. The picture is swollen with windy thoughts and murky notions of perversions, and as Eddie's manager the magnetic young George C. Scott seems to be a Satan figure, but it has strength and conviction, and Newman gives a fine, emotional performance. You can see all the picture's faults and still love it. It's the most vital and likable of Rossen's movies. With Murray Hamilton, Myron McCormick (who is stuck with the worst pseudo-Odets role), Michael Constantine, Stefan Gierasch, and Vincent Gardenia. Based on the Walter Tevis novel; cinematography by Eugen Schüfftan; production design by Harry Horner; music by Kenyon Hopkins; editing by Dede Allen. (In 1965, the theme was adapted to poker, in The Cincinnati Kid; in 1986, Paul Newman appeared in the sequel to The Hustler--The Color of Money.) — Pauline Kael, The New Yorker