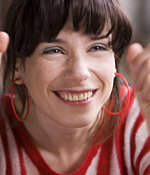 Get ready for Sally Hawkins, a dynamo of an actress who will have her way with you in Happy-Go-Lucky, leaving you enchanted, enraged to the point of madness and utterly dazzled. No list of the year's best performances should be made without her. You should know right off that this is a Mike Leigh movie. It's a cheerier piece of business than you might expect from the British provocateur behind Naked, Secrets & Lies and Vera Drake, but nonetheless a movie driven by character. Leigh, brought up in a Jewish immigrant family, has been called a poet of the working class. His scripts come out of improvisation, from what the actors come up with during rehearsals.

More praise, then, to Hawkins, who put her heart into the persistent smile and bruised soul of Poppy, a London elementary-school teacher who's just turned 30 and still won't be pushed down by life's hard knocks. Poppy's voice is too loud, her grin too broad, and not just when she's binge-drinking with her girlfriends. Poppy wears her optimism like a second skin; it jangles like her jewelry. I wanted to throttle her at first. But, as always, Leigh is up to something more complex.

The film is heartfelt and hilarious, but little more than a series of episodes. Poppy with her roommate Zoe (Alexis Zegerman), whose love goes deeper than friendship; Poppy on a family visit with her pregnant older sister in the burbs, a close encounter almost as scary as Poppy's brush with a homeless man (Stanley Townsend) whose madness may be closer to what's roiling in her own head than she wants to admit. It's revelatory to watch Poppy at school in terms of the caring she shows with a troubled student and the attraction she develops for the boy's handsome social worker (Samuel Roukin).

But the relationship that drives the film is that of Poppy and Scott (Eddie Marsan), the driving instructor she hires when her bicycle is stolen. Scott, a poster boy for morose and Poppy's polar opposite, can barely disguise his anger at the world, bigotry being just one of his hang-ups. In a series of increasingly tense driving lessons, Poppy's patience is sorely tested. Marsan's performance amazes, moving from the comic when he uses sounds ("Enraha") as a driving aid to pity and terror when Scott's jealousy drives him to the brink.

In lesser hands, the film would go off the deep end into cheap theatrics. But Leigh, in his first film featuring widescreen color (from Dick Pope) and a bouncy score (from Gary Yershon), keeps the emotions in balance by keeping them real. There's something raw in Hawkins that wins our empathy for Poppy. Thanks to her, Happy-Go-Lucky is more than a movie, it's a gift.